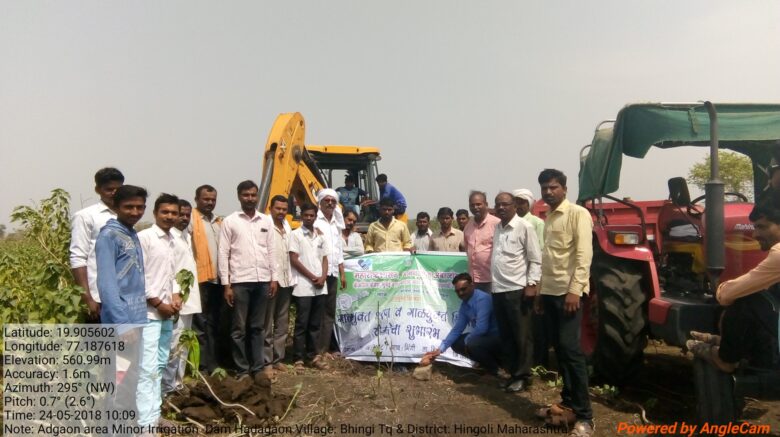 In 2017-18 we worked on the `silt-free dam/farm-with-silt program ( गाळ मुक्त धरण व गाळ युक्त शिवार योजना ). In the course of this program, our organization, working with the government of Maharashtra, Manavlok, Ambajogai, Caring friends, the organization has been doing desilting work at the Hadgaon minor irrigation dam (Gram Panchayat Bhingi, Block & Dist. Hingoli). We provide this silt free of cost to the farmer. The idea was received enthusiastically by the farmers; de-silting increased the depth of the dam and, as a result, the level of water in the dam increased. Farmers benefited because the soil water level increased, the fertility of their lands increased, and this is bound to have a positive impact on productivity.

In order to complete this task, the government paid the cost of fuel required by the JCB machine. The rental for the JCB machine came from Makloo Ambazogai and Caring Friends, Mumbai. Some farmers could not afford to rent the tractor to haul the silt to their farms, and we would like donors to come forward to aid in this cause in the future.

Another positive fallout of this program was a good number of unemployed young people and farm workers found work.

This is one example of our simple attempt to eradicate poverty and we believe that it is definitely worthwhile. This is our endeavor to overcome the drought situation. **

These are the ways in which we had a positive impact:

A. Health of farmland will definitely improve over a period of time.

B. Expenditure of farmers for Nindan reduced. (Nindan is the process of extracting waste that grows in between rows of crop sown).

C. Saved on fertilizers required for crop growing.
As silt retains water, the soil is productive even when there is a dry gap in the monsoons.

Percolation dam at Bhingi and wells in villages water level are totally dried in summer season and villagers and cattle face the problem of high water scarcity in the area. At the time of de siltation, we excavate a Doha / Budki in a dam basin from which villagers & cattle completed their water
demand. But after rainfall dam filled full of water and wells in village supply with ample quantity of water. Villagers of Bhingi express deep thanks for the desiltation work.

The percolation dam at Bhingi and the wells in villages dry up during summer, and villagers and cattle face water scarcities in the area. At the time of de-siltation, we excavate a Doha / Budki in the dam basin which meets the water needs of the villagers and cattle. After the rains, the dam is full of water and the wells in the village have ample water. Villagers of Bhingi have expressed their gratitude and satisfaction about the desiltation work.