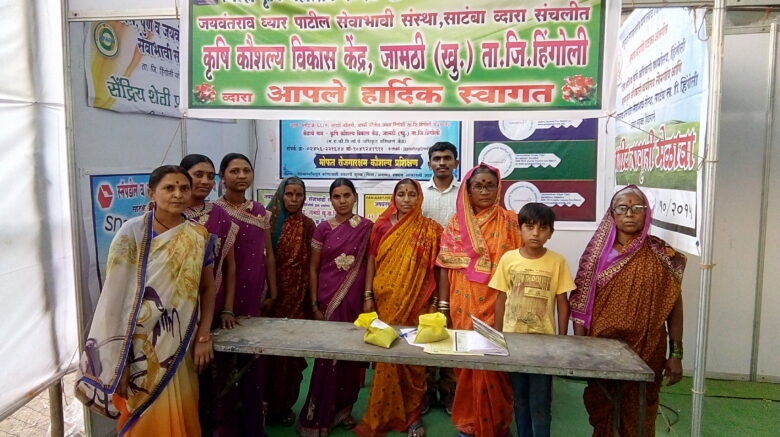 Fruits and vegetables are the key to good health, and there was a time when people grew their own in their kitchen gardens. Almost every home had one. As the population grew, the space shortage made it impossible for the kitchen garden to survive. This has no doubt impacted the health of the people who earlier had easy access to nutritious food.

As increasing numbers turned to the market to buy their fruits and vegetables, the demand increased, and farmers started resorting to chemical fertilizers and pesticides to increase their output. These practices have impacted the health of the consumer to a large extent; the number of people suffering from anaemia, cancer, diabetes, thyroid, etc is on the rise.

In the first phase, we decided to implement the kitchen garden program in rural areas, Since 2015-16, we have been distributing seed kits for kitchen gardens to nearly one hundred families every year. We ensured that women’s self-help groups were present at the events meant to promote kitchen gardens, and we noted that women’s participation was high. Once the motion is set in process, there is no need to buy seeds from the market again. In the course of conducting these programs, we explained to participants the benefits of organic vegetables and fruits, food grains, the medicinal properties of legumes and vegetables. The response was very good and positive. We are implementing this program from a village in Hingoli taluka.

Demonstrations on growing vegetables on rooftops were also given to participants who were short of space for proper kitchen gardens. Chandrakant Patil, the founder of JGPSS, also shared information about his own rooftop kitchen garden on social media. This has been viewed by large numbers, and rooftop kitchen gardens have grown in numbers in Hingoli city. In order to make this a success, it is necessary to train as many women from both urban and rural areas as possible. We wish to implement this program on a large scale, which requires the participation of volunteers and donors. ** Contact Email- jgpsshng@rediffmail.com What’s app Cell 8975363835