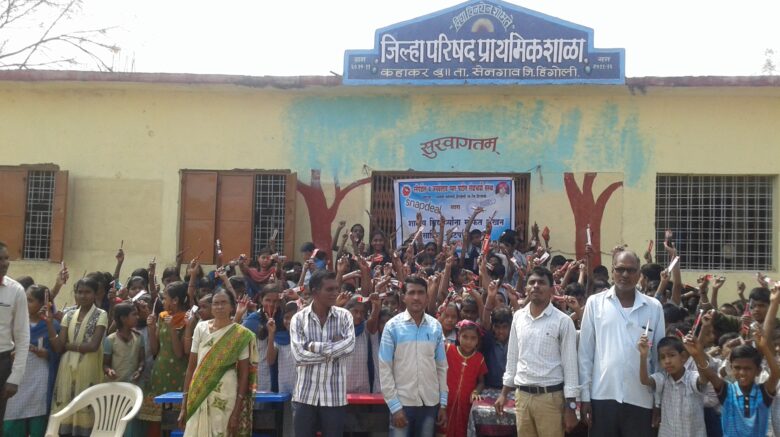 JGPSS has so far carried out public awareness programs on adult education and pre-primary & primary education.

JGPSS has participated in Sakshar Bharat 2012 under the Adult Education Campaign. We participated in this national program in collaboration with the State Resource Center for Adult Education and Training, Aurangabad, for volunteer selection and training. India has adopted a policy of privatization, liberalization, and globalization, and we believe that young people, who are the future of our nation, should align themselves with these changes. Our youth, who are our future, should participate in this wave of globalization.

In order to do this, it is imperative that they learn the English language along with the mother tongue at an early age. An attempt was made by us to start an English medium pre-primary school in the village of Satamba and Jamthi Khurd Block, district Hingoli, in the year 2009-10. Due to a lack of financial support and support from the parents of students, this project has been temporarily suspended. We are seeking donors who will make it possible to resume this activity once again.

Children’s education also suffers due to various other reasons. As their parents are engaged in agriculture, which is a very unpredictable field of work due to natural calamities, droughts, etc, a lot of them often find themselves in difficult financial situations and are, consequently, unable to fund their children’s education.

Our organization has participated in the ‘Literacy India 2012’ program under the adult education campaign. For this national level program, we had joined hands with the State Resource Centre, Aurangabad, for imparting education to adults as well as volunteer training. The program also envisaged the teaching of the English language in rural areas like Satamba and Jamthi Khu in the HIngoli district but it had to be aborted as not enough support was available.

Snapdeal arranged to provide stationery for the children in the rural areas, and the materials received in 2017-18 were distributed free of cost to 1800 students of the Zilla Parishad School. We hope to be able to distribute stationery to students this year as well.

Help The Children of Hingoli

Jayavantrao Ghyar Patil Sevabhavi Sanstha is an organization based out of Hingoli, Maharashtra. They work towards promoting self-sufficiency, organic farming, culture, skill development, and education of the underserved community. JGPSS has so far carried out multiple awareness programs on adult and primary education and this year as schools in and around the village start opening again after COVID-19 restrictions ease, the children, who are the future of our nation, need help. JGPSS is working towards providing these students with the necessary stationery and study material so that the children in the village can once again start learning in an uninterrupted and joyful environment. All the money raised will be used to fund the school supplies for 1500 students of the Zilla Parishad School.